Introduced to the club many years ago by Deon van Zyl of Alwyn Laubscher and Associates, Pieter has assisted the club in so many ways since then, thanks to his wide experience in major events such as the 1994 referendum in 1994 and the 2010 Soccer World Cup.

As a former official of the City of Cape Town, he has good relationships with current office-bearers and some politicians and has been an integral part of the lease renewal process for Killarney.

He worked extremely closely with the Killarney staff and MANCOM, facilitating the negotiations that took Killarney from a junk status property that city officials couldn’t wait to close for housing, to a facility that the city recognises as an important asset to Cape Town.

His PR experience has also proved invaluable when needed by the club, in making the City of Cape Town aware of the value of the motor racing industry, its tourism impact and Killarney’s contribution to road safety initiatives, as well the other events that take place at Killarney.

Pieter’s best used saying is “Killarney has approximately 200 events per annum, seventy of them charity and is the most used stadium in the Western Cape”.

When the club was under an onslaught of punitive rates levies and struggling to meet its commitments, he introduced the club to the appropriate officials, and lent the voice of reason at meetings between the club and city officials so that the club could enter into a deferred payment plan to stay afloat. The club was able to settle the deferred rates in 2020.

The relationship that followed on from that meeting also led to the clearing of interest and debt owed to the cCity, thanks to a write-off by the city in terms of its policies.

He introduced the Killarney team to the city’s events team and this relationship has grown in leaps and bounds. He has also provided assistance in the compiling of applications for event funding, with the net result that the club has received approximately R2 million in funding to date from the city.

Going above what is required, he is often on site to join club officials when meeting with officials and politicians at events, ably promoting Killarney through his relationships with key decision-makers.

Using his vast network of contacts, he has also brought other events to Killarney, helping to convince the city that Killarney is an asset. Notable among these was the 2021 Langa Marathon where athletes were able to qualify for the Tokyo Olympics.

He has even run the media centre at every World Rallycross event held at all Killarney.

But most important of all, he has played a leading role in dealing with city officials as part of the lease renewal and we expect the lease to be renewed shortly.

An invaluable friend, the club looks forward to working with him on new and exciting projects. 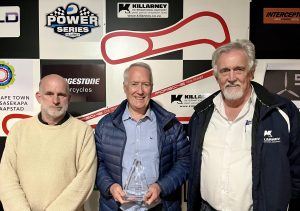