With the holiday season upon us, here are a number of great books to help you spend some interesting and exciting times with a favourite book. Make some time to read these – all from Tafelberg and NB Publishers.

In search of joy in a world gone mad after a near fatal car accident, Ferguson finds herself shattered by PTSD. The meds she’s prescribed at the “Nervous Breakdown Clinic” don’t work. After reading that her hero Bill W, father of the AA 12 Step programme used psychedelics to heal, she decides to embark on a similar journey to address her extreme anxiety.

Despite being terrified that she may relapse, what unfolds is a life changing spiritual adventure assisted by psilocybin, commonly known as “magic mushrooms”. Over the following five years, layers of self-destructive behaviour unravel. Deep wounds from two decades earlier, when she was a hopeless heroin and crack addict, begin to heal.

Then the world is hit by a global pandemic. To escape the dystopian madness, Ferguson finds her dream house, nestled in the remote Matroosberg mountains. But just as she feels safe, a week before it’s registered, a beautiful woman is brutally murdered two doors away. What sometimes looks like heaven can transform into hell in an instant.

Now she’s forced to ask herself: what is freedom, truth and joy? Underpinned by a deep quest to travel through the ordinary doors of perception, Bamboozled is a deep exploration of self, set in an age of fear and false prophets. Written in Ferguson’s no-holds barred signature style, her new memoir is about looking for patterns and finding answers in a world that’s crumbling. It’s also about loosening the grip of money and finding magic.

Then she rescues a dog, who ends up rescuing her.

About the author: Melinda Ferguson is the bestselling author of her addiction trilogy Smacked, Hooked and Crashed. She is also an award-winning publisher. In 2016 her groundbreaking title, Rape: A South African Nightmare by Prof Pumla Gqola, won the Alan Paton Award for non-fiction. In 2020 she joined NB Publishers under her imprint Melinda Ferguson Books. 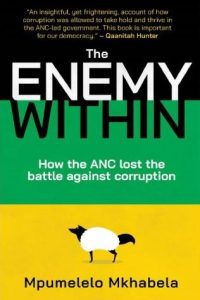 The Enemy Within How the ANC lost the battle against corruption

At a watershed meeting in Port Elizabeth in 2000 the ANC committed itself to “the new cadre” project – a project to develop ANC members who are dedicated, selfless people who steer clear from corruption and embrace a new morality. Yet, 22 years later the ANC is consumed by corrupt cadres.

What happened and why was the ANC’s “new cadre” project such a complete failure? Political analyst and News24 columnist Mpumelelo Mkhabela answers these questions and more by looking at what happened inside the party over the past two decades.

How did former presidents Nelson Mandela, Thabo Mbeki and Jacob Zuma handle corruption and how did this set a trend in the party?

The Enemy Within tells a fascinating and gripping story, starting with Mandela, the Scorpions and Tony Yengeni all the way to Zuma and the Guptas to explain exactly how we got here.

Mpumelelo Mkhabela is a political analyst and columnist on News24. He is a former editor of the Sowetan and Daily Dispatch; former parliamentary correspondent for City Press and the Sunday Times. He holds a PhD in Political Science. He lives in Centurion.

Before fleeing the family estate near Lviv, in what is now Ukraine, Jan Glazewski’s father buried what he could salvage of the family silver in the forest. The Glazewskis left war-ravaged Europe after World War II for a new life in South Africa. When Jan is born in Paarl in 1953, he nearly dies, like his elder brother before him, of severe haemophilia. Against the odds, he survives childhood – only to discover, at the start of his career, that he is HIV-positive from receiving contaminated blood products. Despite this setback, Jan goes on to have a remarkable legal and academic career, which includes his involvement in drafting the environmental clause in the new South African Constitution. It is only after retirement that Jan finally has the opportunity to indulge his lifelong obsession: to recover the family silver.

Jan ‘Janek’ Glazewski is of Polish descent. Born in Paarl in 1953, Jan is Emeritus Professor in the Institute of Marine and Environmental Law at UCT. He was involved in ensuring the incorporation of environmental rights in the South African Constitution, and has written the leading textbook in the field, Environmental Law in South Africa

Sex, Lies & Alibis is the eagerly anticipated final book in her deliciously steamy and shockingly scandalous trilogy that began with the runaway success of Eva Mazza’s debut novel, Sex, Lies & Stellenbosch, followed hot on the heels by Sex, Lies Declassified. This will have readers turning pages in anticipation to discover what finally happens to our heroine, Jen and the rest of the dysfunctional cast from Stellenbosch, with its penchant for impropriety and unapologetic wealth.

After stumbling on her adulterous husband, John, in book one, by the time Jen gets to the final part of the trilogy, she’s discovered that happy endings don’t necessarily come in the form of a man, no matter how good the sex or how exquisite the backdrop.

Despite trying to escape her past by flying to Monte Carlo where she’s landed a million dollar contract to re-design the interior of a superyacht, circumstances beyond her control force her to return to the Stellenbosch winelands.

Eva Mazza is a long-time resident of Stellenbosch. She is the author of Sex, Lies and Stellenbosch, Sex, Lies Declassified and Christine which was recently optioned by a Hollywood film producer. Sex, Lies & Alibis is the final instalment of her successful sex trilogy. 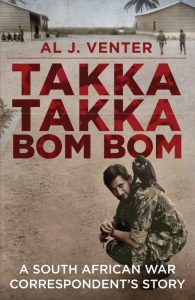 From a small town in Mpumalanga to dodging bullets in war-torn hellholes: Al J. Venter, the oldest war correspondent still active today, bore witness to some of humanity’s biggest atrocities over the past 55 years – and has lived to tell the tale.

In the 1960s, with little money, a sense of adventure and a healthy dollop of chutzpah, Venter set out overland from Cape Town to London, braving dodgy roads and hostile territory in a newly post-colonial Africa. And so an iconic war journalist was born.

Since then, Venter has reported from 25 conflict zones, from the civil wars in Mozambique and Nigeria and the Israel-Hezbollah War in Lebanon to the wars in the Congo.

In his memoir, Venter masterfully recounts his experiences, sharing the real stories behind the headlines. From a face-off with drunken soldiers pointing a machine gun in his face and surviving tropical diseases, to losing friends in combat . . .

Al J. Venter (born 25 November 1938) is a South African war journalist, documentary filmmaker, and author of more than sixty books. He is the oldest active war correspondent. He is the author of books such as Warstories and Gunship Ace: The Wars of Neall Ellis, Helicopter Pilot and Mercenary. He stays in the United Kingdom.

On the face of it, life is looking good for Sara-Jayne. She’s a popular radio personality, a best-selling author and she’s recently been reunited with her long-lost father, nearly 40 years after being given up for adoption as a baby.

Best of all, she’s just found out she’s about to become a mother, with Enver, the ‘love of her life’. She’s convinced that she’s finally heading towards her “happily ever after”. But six weeks after discovering she’s pregnant, Enver relapses on heroin and disappears. Devastated, Sara-Jayne checks herself into The Clinic and despite the little life growing inside her, she realises she’s never felt more alone.

In the much-anticipated follow-up to her best-selling memoir Killing Karoline, Sara-Jayne is forced, for the sake of her unborn child, to find a way to save herself. But to do this, she has to work out why everyone always leaves her. Why, like that song, is she always looking for love in all the wrong places? And why can’t she seem to break free from mad, bad love?

Sara-Jayne Makwala King is an award-winning broadcaster, journalist, and author. In 2017, her memoir Killing Karoline (What happens when the baby they buried comes back?) was shortlisted for the University of Johannesburg Debut Prize for South African Writing. Makwala King holds an LL.B (hons) degree and an MA in Journalism. She lives in Cape Town and hosts her own radio show on CapeTalk.

When 18 year-old Morné Harmse walked into his high school in 2008, armed with a samurai sword, he had one mission – to commit a massacre.

Inspired by the Columbine high school killings, his fantasy to make people “take notice” had been brewing for over a year. By the time his sword-slashing spree had ended, a pupil was dead and three others brutally injured.

Now, 14 years later, Harmse is out on controversial parole. Samurai Sword Murder finally puts together the pieces of this brutal tragedy.

Very few farm murders appear to be committed for political reasons. But the response to them is often political.

Making up less than half a percent of all homicides reported each year, farm killings dominate the national narrative on violence. At the heart of the conflict is a long history of violence on agricultural land, and deep-rooted fears and prejudices about race, belonging, and who gets to feel safe in South Africa. In this powerful new book, journalist and violence researcher Dr Nechama Brodie challenges many of the myths used to narrate farm killings. The book explores news reports, data, legal cases and expert research on violence on farms, including violence experienced by farm labourers and in black communities surrounding mostly white[1]owned farmlands, which is often overlooked and under-reported. The story it reveals lays bare the connections and disconnections between people, place and past that contribute to the violence of the present.

Dr Nechama Brodie is a journalist and author of seven books, including critically acclaimed The Joburg Book and Femicide in South Africa. She holds a PhD from the University of the Witwatersrand, where she is also an occasional lecturer, and heads the Homicide Media Tracker project, researching media coverage of violence. She lives in Joburg.