These two rugby-centric schools have been friends, off the field, rivals on the field, for the past 150 years. While the earlier Paul Roos matches were played against the teams closer to central Cape Town, the so-called “Cape” leagues which included teams like SACS, Wynberg, etc., and the team from Paarl featured in what was known as the “country” leagues, which meant matches between Paarl Boys’ High and PRG were very intermittent.

This match is always a highly anticipated one with both sides loving to display their clinical and evasive skills. These two sides have not met since 2019, and PRG have only recorded three victories in the last ten encounters.

The last time the Stellenbosch side beat their Paarl neighbours was in 2018 at the very same Markötter. There is a new air of expectancy at the recently upgraded modern-looking home of Paul Roos, which now boasts one of the most advanced training facilities of any school in South Africa.

Expectation ahead of these schoolboy matches are that the home team should walk away with the spoils albeit by the smallest of margins. This, however, was not the case in the 1970’s when Paarl Boys’ High recorded a ten-match unbeaten streak and in the late 1980’s and early 1990’s, Paul Roos won four matches in a row.

Paul Roos’ 2022 season got off to a rather lacklustre start, losing both opening games to Affies and Helpmekaar at the North-South tournament. They bounced back a few weeks later when they beat Grey PE away and then carried this momentum heading into St John’s Easter festival. This will be a testing encounter for the Stellenbosch side as they hope to find their rhythm with the right combinations hoping to be up for the challenge put forward by the home side.

Their most memorable win, so far, of the 2022 season came against Paarl Gimnasium with an against-all-odds last-minute victory.

Paarl Boys’ High got off to a better start than their Stellenbosch counterparts, going unbeaten until a shock defeat against Rondebosch, a loss against the Southern Suburbs team for the first time in more than a decade. They bounced back with a win from both of their matches at the Wildeklawer tournament until they came unstuck against Grey College in the second half in Bloemfontein. They will be hurt by that loss and the Maroon Machine can expect a wounded Paarl Boys who would want to set their record straight. 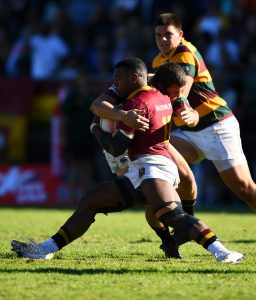 As a South African, you are being called upon to comment on the proposed amendments to the SA Health Act Regulations and make it known…